The Montreal Protocol, celebrated on World Ozone Day (September 16), has proven to be more impactful and important to the health of the environment than the parties to the treaty could have imagined when they created the global treaty on that date in 1987.

The impetus then was to prevent the destruction of the ozone layer from CFC gases accumulating in the atmosphere. That goal has been accomplished as CFCs were phased out and HCFCs are on their way out globally, allowing the ozone layer to gradually heal by 2070. The ozone layer’s ability to filter out harmful ultraviolet radiation remains intact. As a result, the Montreal Protocol has been dubbed “the world’s most successful environmental treaty.”

But the Montreal Protocol’s benefits don’t stop there. The treaty is already recognized for helping to mitigate rising global temperatures from climate change, because ozone-depleting substances are also potent greenhouse gases. The Kigali Amendment to the Montreal Protocol, adds to that success by planning the phase down of HFCs, also highly potent greenhouse gases.

Now, a new study by an international team of scientists from the U.K., U.S. and New Zealand has shown that restoring the ozone layer and avoiding increased ultraviolet radiation also has profound benefits for plants and their capacity to store carbon through photosynthesis. The ability of plants to serve as a carbon sink is one of the key elements of preventing global temperatures from exceeding dangerous levels.

The study, “Montreal Protocol protects the terrestrial carbon sink,” was published on August 18 in the journal Nature.

By examining the effect of ultraviolet radiation on plant growth, the researchers estimate that without the Montreal Protocol “there could have been 325–690 billion tonnes less carbon held in plants and soils by the end of this century (2080–2099),” according to the study. This change could have resulted in an additional 115–235 parts per million of atmospheric carbon dioxide, which might have led to additional warming of global-mean surface temperature by 0.5 to 1.0°C (0.9 to 1.8°F), the study notes.

“Our findings suggest that the Montreal Protocol may also be helping to mitigate climate change through avoided decreases in the land carbon sink,” the study says. The study calls the scenario prevented by the restoration of the ozone layer through the Montreal Protocol the “World Avoided.”

The impact of the Montreal Protocol is explained in the PBS documentary, Ozone Hole: How We Saved the Planet.

“It is challenging enough to keep overall warming below 1.5 or even 2 degrees Celsius,” writes David Doniger Senior Strategic Director, Climate & Clean Energy Program, the Natural Resources Defense Council (NRDC). “Imagine how much harder it would have been without the Montreal Protocol.”

It is challenging enough to keep overall warming below 1.5 or even 2 degrees Celsius. Imagine how much harder it would have been without the Montreal Protocol. 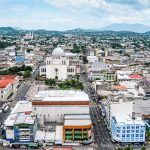