The newly named Climate Pledge Arena in Seattle, Washington (U.S.), which will be the home of a National Hockey League (NHL) team beginning in 2021, will employ an ammonia chiller system as part of a wide-ranging effort to make it the first arena in the world to be certified net-zero-carbon.

Previously named the KeyArena, the facility, owned by the City of Seattle, is undergoing a renovation that is expected to be completed in the summer of 2021. Online retail giant Amazon recently announced that it had acquired the naming rights to the arena, and renamed it Climate Change Arena; the name refers to the “Climate Pledge,” launched in 2019 by Amazon and Global Optimism, which calls on signatories to be net-zero-carbon across their businesses by 2040.  The arena will be funded with significant investment from Amazon and Oak View Group, which will operate the facility.

According to the NHL, the refurbished ice rink will feature “the greenest ice in the world using rainwater, refrigerants with zero greenhouse gas emissions and electric Zambonis.” An industry source who declined to be named confirmed that the refrigerant is ammonia; details on the system were not available.

Though the arena will use an ammonia-based refrigeration, the NHL has promoted installing ice-making systems that use HFO blends, following an agreement it struck with Chemours in 2018, which the league said supports the NHL Greener Rinks Initiative.

“It’s great to see this flagship rink using a truly sustainable refrigerant, but at this point there’s no excuse for the NHL not to be using natural refrigerants in all ice rinks,” said Christina Starr, Climate Policy Analyst for Washington, D.C.-based Environmental Investigation Agency (EIA).

“It’s been very disappointing to see the NHL endorsing [HFO blends] with hundreds of times the climate impact of natural refrigerants, when a third of NHL rinks already use ammonia.”

CO2 refrigeration offers another sustainable and cost-effective option, Starr noted, adding, “Any ice rink project that adopts an HFC is quite simply not choosing a green option.”

According to Amazon, the Climate Pledge Arena’s other environmental features will include the following:

“Climate Pledge Arena will set a new sustainability standard for sports and event spaces around the world,” said Jason F. McLennan, Founder of the International Living Future Institute and CEO of McLennan Design, in the Amazon announcement.

It’s great to see this flagship rink using a truly sustainable refrigerant, but at this point there’s no excuse for the NHL not to be using natural refrigerants in all ice rinks. 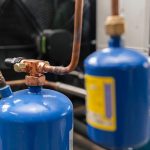