The African Ministerial Conference on the Environment (AMCEN), in a four-day meeting ending November 15, called for fast action against short-lived climate pollutants (SLCPs) such as HFCs, promoting a combined strategy of improving the energy efficiency of cooling equipment while phasing down HFC refrigerants under the Kigali Amendment.

African ministers of the environment gathered in Durban, South Africa, at the 17th session of the AMCEN, held under the theme “Taking action for Environmental Sustainability and Prosperity in Africa.”

They highlighted and acknowledged the importance of the recent findings of the international scientific community on climate change, while also noting the importance of super-pollutant mitigation for climate action, according to the Institute for Governance and Sustainable Development (IGSD). Super-polluting SLCPs include HFCs, methane and black carbon.

The Montreal Protocol’s 2018 quadrennial Scientific Assessment of Ozone Depletion was highlighted at the conference. It confirms that beyond phasing down HFCs, improving the energy efficiency of air conditioners and other cooling equipment has the potential to double the climate benefits of the Kigali Amendment in the near-term – one of the biggest mitigation opportunities available today.

As such, the ministers urged Parties to the Montreal Protocol to adopt action plans “preventing the market penetration of obsolete equipment while facilitating access to secure and energy-efficient technologies.”

Further, the ministers urged African states which have not yet ratified the Kigali Amendment to the Montreal Protocol to ratify and implement it as soon as possible.

A report on the “Benefits of Energy Efficient and Low-Global Warming Potential Refrigerant Cooling Equipment” was also highlighted at the event. It shows that by deploying today’s best available technologies for stationary air conditioning and refrigeration can cut cumulative emissions from these sectors by 38–60Gt CO2e by 2030 and by 130–260 Gt CO2e by 2050, depending on future rates of de-carbonization of electricity generation. 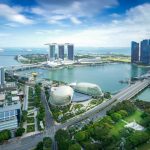