One of the obstacles to purchasing a commercial or industrial natural refrigerant system has been its high capital cost. While costs have declined in Europe and other parts of the world with economies of scale, they may be higher than those of traditional systems, and in any case, represent a major investment that may take years to recoup with energy savings.

But what if an end user could avoid capital costs altogether and just pay for the cooling provided by an installed system as if it were a utility?

This is not a new model as it is similar to that of large-scale district cooling installations. However, for commercial or industrial installations for single end users, it is a relatively new concept.

South Africa-based Energy Partners, one of a handful of companies that have entered this arena, is currently manufacturing and installing three ammonia systems that will be based on its outsourcing model. (It also has installed multiple outsourced f-gas refrigeration systems.) Other providers include Sphere Solutions in South Africa, the Caribbean Basin Sustainable Energy Fund, Daikin in Belgium, Smart Joules in India for hospital installations, and the Swiss foundation BASE.

Energy Partners’ outsourced model “is a utility approach where clients purchase the ‘cooling energy’ and do not have to be concerned with the cost or hassle of owning the equipment,” said Dawie Kriel, Director of Energy Partners, which also provides solar, steam, water and fuel solutions. “This allows for a consistent and reliable supply of cooling energy for customers.” Customers also pay a fixed cost for maintenance, which is managed by Energy Partners.

Energy Partners pays for the electricity that the refrigeration system uses to produce the cooling that the customer buys from them. “We, in effect, guarantee the conversion of electricity to cooling over the life of the plant (usually 15 years),” explained Kriel. Although there are seasonal differences, the company does advanced modeling of the plant beforehand to arrive at the best performance a specific system can achieve and then guarantee a minimum of 80-90% of this, depending on the circumstances.

Energy Partners boasts a team of more than 400 people including more than 80 engineers, offering the integrated skills of engineering, project implementation, and investment. It has been using this outsourced model for three years and offers it for CO2 systems as well (which they can also manufacture and maintain inhouse).

“It came about because our customers wanted to achieve energy savings but had problems finding/motivating the necessary capital required to get it done,” said Kriel. “We also determined that a large percentage of the savings were operationally driven (such as plant control and maintenance) and this made outsourcing logical. It was a concept that was well-developed in our solar and steam divisions, so the move to refrigeration was easier for us and our funders.”

“We, in effect, guarantee the conversion of electricity to over the life of the plant (usually 15 years).” 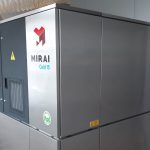 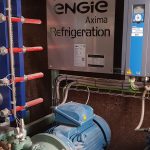