The cold-chain market is expanding in the Philippines, fueled by a growing population – projected to reach 142 million in 2045, up from 104 million today – and government investments in rural infrastructure.

For GNQ Industrial & Contracting Corporation (GNQ), one of the top industrial refrigeration contractors in the country, this represents a considerable opportunity to grow its business, but also significant challenges, including rapidly changing refrigeration technology, increasing competition and environmental regulations.

To shed light on GNQ’s opportunities and challenges, including its use of natural refrigerants, Accelerate Magazine interviewed Alejandro Quitalig, President of GNQ, at his office in Parañaque City, Metro Manila.

// Accelerate Magazine: When did GNQ start working with natural refrigerants?

Alejandro Quitalig: We started using natural refrigerants, meaning ammonia, in 1988. This was when we were appointed exclusive distributors of Frick screw compressors by York, which owns Frick. The challenge at the time was how to gain market acceptance of the screw compressors because most end users were using reciprocating compressors.

The first customer we approached was brewery San Miguel Corporation, because they were the largest end user of refrigera- tion. Once we were able to convince them to use screw compressors, it became easier for us to approach the other beverage and cold chain companies. Today, our focus is in the beverage sector, meaning soft drinks and beer, as well as the cold-storage industry. About 90% of our business is with ammonia and 10% is with freon.

// Accelerate Magazine: What is your view on the current state of the cold-chain industry in the Philippines?

Alejandro Quitalig: It is expanding. There are new companies entering the cold-chain market. There only used to be a few cold-storage operators, but now even certain companies that were originally only contractors have entered the cold-storage business. We see our customers increasingly building new cold-storage facilities in the regions of Cebu and Davao, which are further away from the more developed area of Manila.

// Accelerate Magazine: What do you think is driving this expansion of the cold- storage industry?

Alejandro Quitalig: It’s the population. The population of the Philippines is increasing, so the government is constructing infrastructure in Visayas and Mindanao. They want to spread the population outside of Manila, which is already congested. We also have to take into consideration that the Philippine economy continues to grow.

// Accelerate Magazine: Going forward, what does this mean for GNQ as a business?

Alejandro Quitalig: Our competition is increasing. There used to only be a handful of companies competing for projects. But lately, there is an increasing number of foreign contractors coming into the market. Our strategy to compete is to continue to be cost competitive with our ammonia systems. For example, formerly, we were using components imported from certain overseas companies that were very expensive. But now we are able to look for components from other manufacturers in other regions with very competitive prices. So this lowers the overall costs for our customers.

// Accelerate Magazine: In terms of technology, how have the refrigeration systems that you design, supply and install for your customers evolved?

Alejandro Quitalig: Overall, there had not been much change until two years ago when we heard about these new low-charge ammonia systems. We were about to use them but we found out that the air coolers were very expensive. They are twice the normal cost so we were not able to use them. To clarify, these were ammonia direct expansion systems as opposed to our usual pumped recirculated systems.

// Accelerate Magazine: What is the current level of awareness of low-charge ammonia technologies among end users in the Philippines. Do you see any interest?

Alejandro Quitalig: Yes, there is interest in these new technologies, of course, because everybody wants to be competitive and they want more efficient refrigeration systems. The cost of electricity is high as well, so they are also trying to find means to lower power consumption. In our projects, we always select the system that will give the highest Coefficient of Performance (COP).

In addition, especially in the beverage industry, companies are trying to minimize [ammonia] refrigerant charge. They are doing this by using a plate heat exchanger. The plate heat exchanger is an independent unit — one condenser, one evaporator – whereas before, it was centralized so we would have a large volume of refrigerant. We want to avoid that in case of a leak. If the company were located in a residential area, the govern- ment would go after them.

// Accelerate Magazine: Do you see any potential for CO2 transcritical systems in the Philippines?

Alejandro Quitalig: Here in the Philippines, I believe CO2 transcritical is not applicable because of the ambient temperature, which is usually around 35°C (95°F) to 40°C (104°F) in summer. We don’t know much about this application yet, but if there is new technology that will overcome this condition, we will go for it. We are open to new technology.

// Accelerate Magazine: How is GNQ preparing for these future low charge ammonia and CO2 technologies?

Alejandro Quitalig: We are closely cooperating with our partner Johnson Controls to actively seek out and learn about these new kinds of systems. We would like to use NH3/CO2 systems here in the Philippines, for example. In addition, we continually send our technicians for training conducted by Johnson Controls in Thailand. In the coming years, if there are any new developments, we will participate in that training.

// Accelerate Magazine: Finally, what is driving you personally?

Alejandro Quitalig: Our mission has always been to make GNQ lead the industry. So, we are teaching our people — teaching them how to run the business and also about the technology. We want this to continue. That is our mission. 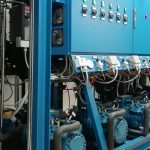 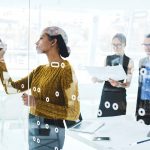 Enhancing a CO2 System’s Efficiency with an Absorption Chiller