At ATMOsphere Australia, held in Melbourne May 8-9, Jan Dusek, managing director for shecco Japan,  posed a question to conference participants. (shecco, publisher of Accelerate Magazine, is the organizer of the conference.)

During his presentation, Marcus Meier, ALDI Australia’s property director, replied to this inquiry.

“To Jan’s question, do we achieve the 100 [transcritical CO2] stores in 2025? If I get that across the line,” he said referring to a test ALDI is developing for its transcritical systems, “I would do 100 stores in 2025, just with ALDI.”

The audience then erupted in spontaneous applause.

ALDI Australia is a division of ALDI Süd (South), based in Mülheim, Germany, which is one of the most proactive users of transcritical CO2 refrigeration systems in the world.

ALDI Süd reported in 2018 that by the end of 2017, it had installed transcritical CO2 systems in 1,496 stores worldwide, including 1,324 in Germany. It is installing them in all new stores in Germany.

In Australia, however, the extreme climate poses significant challenges to rolling out CO2 transcritical systems as quickly as in Europe and North America. “Australia is quite a different beast,” said Meier.

Still, Meir believes that ALDI Australia, which operates over 500 stores, could roll out 100 transcritical CO2 stores by 2025 – under the right circumstances.

To date, the chain has installed transcritical systems at seven stores, including the first in Victoria in 2015, and one near Melbourne in 2018. It is also using EptaBlue Natural CO2 water-loop units in self-contained cases at a store in Melbourne since last year (See Test Results for Self-Contained CO2 System).

At ATMOsphere Australia, Meier provided energy-efficiency data on CO2 transcritical systems at several stores using different configurations to boost efficiency, such as parallel compression and adiabatic cooling. He compared the energy use of those systems to that of R134a/CO2 cascade systems running at comparable stores.

The results, he said, were a bit sobering. The transcritical CO2 systems, on average, were only about 2% more energy efficient than the cascade systems over one year.

In the summer months, some of the systems use adiabatic water sprays on the condensers to help lower the gas temperature as it exits the condenser. However, this raises another concern for ALDI: Water usage is high during these months and represents a risk to the business.

In order to mitigate this risk, ALDI is developing trials for a transcritical system that would eliminate the need for water sprays/adiabatics. Though still in the early stages, Meier said that the initial goals for the revised system include maintaining operational stability during summer months; completely eliminating water usage; and reducing operational costs. He did not disclose technical details about the system.

Meier was confident that if ALDI achieves these goals, it could roll out transcritical CO2 Australia-wide. “This, I believe, is where our future lies,” he said.

The system is used in self-contained, plug-in cabinets, with heat withdrawn by the water loop.

After several months of operation, Marcus Meier, ALDI Australia’s property director, revealed some conclusions from this test at ATMOsphere Australia 2019. The advantages of the system, Meier said, lay in three areas.

Second, the solution makes sense for sites with engine-room space constraints — which was one of the original motivations to trial the system. “It’s a good solution if you are in a mixed-use development where you don’t have a plant room or you don’t have a lot of space,” Meier said.

In this case, the system was installed as a refurbishment in a multi-story high-rise building in Melbourne’s space-constrained central business district.

Finally, the units are “ideal for sites with sensitive noise restrictions,” he said.

With regard to energy efficiency, however, the units did not live up to expectations. “The energy usage,” Meier said, “is definitely not what we would go forward with at this stage.” 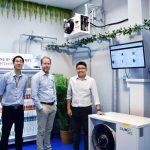 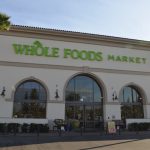