A recently opened Woolworths Supermarket in Burwood, a suburb of Melbourne, Australia, is the first supermarket in the world to become associated with certification from the stringent Living Building Challenge (LBC) performance standard, in part by employing two transcritical CO2 refrigeration systems and doors on all meat and dairy cases.

The supermarket is located in the Burwood Brickworks shopping center, which is in the process of completing its certification.

The LBC is a green-building certification program and sustainable-design framework that visualizes an “ideal” built environment. It is marketed as “the world’s most rigorous proven performance standard for buildings.” Successful certification requires net positive energy and water usage, among many other criteria.

The Woolworths store will incorporate a range of sustainability initiatives that aim to reduce the environmental impact of the store’s operations and help customers live more sustainably, too. The Burwood Brickworks development incorporates a large solar PV system and an embedded electricity network.

“The Woolworths store, located in the Burwood Brickworks [shopping center], is the next step in our journey to create a neighborhood food store, with sustainability and the needs of local customers at the heart of its design,” explained Claire Peters, Woolworths Supermarkets Managing Director, in a statement. “As Australia’s largest retailer, we recognize our responsibility to minimize our environmental footprint and are committed to playing our part in creating a greener, more sustainable future.”

The new store uses 100% renewable energy, which is equivalent to taking 700 cars off the road each year. “From store lighting and air-conditioning to food refrigeration and preparation, we have looked at all angles to see how we can build and run this store more sustainably,” said Peters.

Three transcritical CO2 refrigeration racks are being used by Woolworths in the shopping center, two from Kirby for the supermarket’s chillers and freezers, and one from SCM Frigo (Beijer Ref) for the Dan Murphy’s liquor store (part of the Woolworths group) located inside the center. Both systems include parallel compression.

Doors have also been included on all meat and dairy cases, which will reduce the energy consumption by around 30%, by preventing cold air from spilling from the cases, noted Woolworths. Energy is also further reduced by use of waste heat from refrigeration to heat the store and switching off lights after hours.

The refrigeration design criteria “was aimed at achieving the required product performance temperatures in all cool rooms and showcases, at peak outdoor ambient conditions, in a manner which optimized energy consumption, minimized site installation complexity and operated without employing synthetic refrigerants,” said Dario Ferlin, Refrigeration Engineer at Woolworths Food Group Australia. In addition to the Kirby racks, the refriger- ation equipment for both systems included display cases from Hussmann, LUVE gas coolers from Kirby, and controls from Emerson.

LBC compliance included a “red list” of undesirable materials, such as PVC. This proved quite a challenge for the team as the material is usually widespread throughout electrical insulation and drain piping, explained Ferlin. “Kirby contacted over 40 suppliers to obtain component composition details to ensure compliance. Through such measures and close consultation with the Woolworths engineers, we were able to achieve a significant reduction in PVC across both racks,” explains Douglas Herkess, Segment Engineer, Kirby.

Another challenge was installing doors on virtually all showcases, including the low-height, semi-vertical ones – which is quite uncommon and required some bespoke design work.

From store lighting and air-conditioning to food refrigeration and preparation, we have looked at all angles to see how we can build and run this store more sustainably”

The shopping center was developed by Frasers Property Australia, with first engagement with Woolworths dating back as far as January 2017, confirmed Ferlin. The refrigeration installations were undertaken by Woolworths installation team WRI, with work beginning around June 2019 and commissioning completed by late November 2019 – in time for the store opening on December 6.

According to Ferlin, the refrigeration sector in Australia is several steps ahead of the local HVAC industry when it comes to sustainability and natural refrigerant systems. This is in part because of build and lease agreements where the ownership of the HVAC assets generally sit with the landlord, unlike the refrigeration assets. At the Burwood Brickworks store, the AC system, which uses HFCs, is provided by the shopping center.

Ferlin sees great potential in using natural refrigerants in retail applications. “Wearing an engineering hat alone, it’s fair to say the opportunities are enormous. Particularly with propane self-contained systems (refrigeration and AC),” he explained. “However, a broader view requires other non-engineering challenges to be addressed, including governance of technicians suitably qualified to work on flammable and/or toxic refrigerant systems.”

In Australia, Woolworths presently operates 13 transcritical CO2 stores – 12 supermarkets and one liquor store. “I expect we will be approaching 20 by year’s end,” said Ferlin.

But the Woolworths Burwood Brickworks store remains “the culmination of all our efforts to date in one store,” said Peters. “We will continue to try initiatives that help us reduce our environmental impact and look forward to the feedback from our teams and customers as we do.” 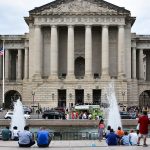 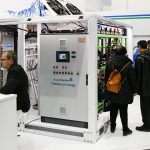