It is safe to say that safety is the number one issue that comes up in regard to the future use of ammonia in industrial refrigeration in China. But it’s an issue that the country, under increasing pressure to phase out synthetic refrigerants, needs to address.

The situation is not being helped by local governments, which have unilaterally blacklisted ammonia following major accidents involving the gas in recent years. This, however, has only increased the determination of those who intend to lead China back towards a path where ammonia is used safely in industrial refrigeration.

This determination was articulated at the ATMOsphere China 2019 conference, held in Shanghai in April. (The conference was organized by shecco, publisher of Ammonia21.com.)

Ma serves as deputy director of the Cold Storage and Cold Processing Committee at CAR, the leading industrial refrigeration association in the country, which is responsible for the creation of safety standards and design codes.

The accidents, he said, were not related to the system itself. “Rather, the main problem [lay] in compliance to safety and design standards by employees.” In any event, Ma said, the result was “a huge blow to the ammonia refrigeration industry in the country.”

In response, stakeholders at the conference agreed that an increased focus on safety standards and practices combined with more training of technicians, would be key to the return of ammonia use in the country.

Yifan Yang, deputy secretary general for CAR, noted that a number of the group’s industry safety standards and design codes have been or are being updated. For example, professional standard AQ 7015-2018, which has been in force since December 2018, includes several safety standards and specifications for ammonia refrigeration technology. Nine-year-old Chinese National Standard GB 50072-2010, described as a “code for the design of cold storage facilities,” has recently been under revision.

From our standpoint, ammonia has a lot of potential in China.”
– Marvin Moreno, Hansen Technologies Corp.

With China’s leading industry association preparing and revising safety standards, it is clear that the Chinese market is now ready to adopt the next generation of ammonia and CO2-based solutions for the industrial refrigeration market.

Several of the world’s leading suppliers of cutting-edge industrial refrigeration technology were present at the ATMOsphere China 2019 conference. They described the solutions they are currently offering to the market as well as activities supporting education and training in the industry.

Mayekawa, which is the manufacturer of the NewTon NH3/CO2 packaged refrigeration system, worked with a local Chinese manufacturer, Square Technology Group, to develop the new system. The system debuted at the China Refrigeration 2019 exhibition, also held in Shanghai in April.

In addition, refrigeration and chiller OEM Johnson Controls discussed its “ammonia safety roadshow,” which it conducted last year. “We made six different stops in China where we promoted ammonia safety and how it can be continued to be used in a sustainable and energy efficientway,” said Cicci Xi, Johnson Controls’ Asia director of product technology for Global Industrial Refrigeration.

Danfoss also recently held several events where it tried to convince stakeholders of the benefits of using ammonia rather than R22. And Hansen Technologies Corp. is also supporting ammonia use in China “From our standpoint, ammonia has a lot of potential in China,” said Marvin Moreno, international sales director for U.S.-based Hansen Technologies Corp. “The foundation for that potential really has to be safety, awareness and education.”

While overseas suppliers are helping bring know-how and technology to China, the United Nations Development Programme (UNDP) has been focused on supporting technology transfer and capability at the local level. UNDP does this mainly by funding the local development of new technology and converting domestic production and manufacturing lines.

Yun Hong, representing China’s UNDP office, informed ATMOsphere China participants that, as of March 2019, they have conver ted a total of 33 production lines, with 20 of them now using natural refrigerants. In addition, Hong said that Chinese manufacturer Moon-Tech, with the UNDP, recently developed its new “GEPTR290/ CO2” system aimed at “chemical process cooling” applications where traditional water chilling units are used. R290 is the primary refrigerant and CO2 is the secondary refrigerant. The system was exhibited at the China Refrigeration 2019 exhibition.

Though China has seen a big shift towards synthetic refrigerant use in industrial refrigeration in recent years, it seems this change is only temporary, with a return to ammonia on the horizon. 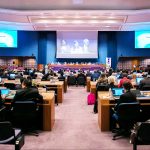 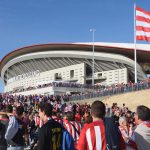