The Future Ammonia Refrigeration Systems (FARS) project aims to develop components to help reduce ammonia charges in overfeed systems to 1.2kg ammonia per kW capacity (9.3lbs/TR), or less, including in existing systems. DTI expects the project to be completed by March 30, 2021.

Other ammonia system configurations are using even lower charges. According to World Guide to Low-Charge Ammonia, published by shecco (publisher of this website), low-charge ammonia packaged systems can employ a charge of about 0.55 kg/kW (4.3 lbs/TR), while the charge for ammonia/CO2 cascade systems is usually between 0.5 – 0.83 kg/kW (4 and 6 lbs/TR).

Before 2014, the charge of a traditional ammonia system was typically around 5kg/kW (39lbs/TR) of cooling capacity. In newer designs, they have come down to approximately 4kg/kW (31.4lbs/TR).

Higher efficiency is another benfit of lower ammonia charge. “There is great potential to improve the ammonia plants you see today – both in terms of energy efficiency and safety,” said Jóhannes Kristófersson, Senior Project Manager for Cooling and Heat Pump Technology at DTI.

At project start-up, DTI had a “conservative expectation” that its new solutions would generate electricity savings for the plants of 4-6% compared to traditional flooded industrial plants,” Kristófersson, said, adding, “Here, a short time before project completion, it is clear that the estimated potential will be met.”

The main idea behind the FARS project is to minimize pressure loss in the system by developing a continuous active control. This ensures operation with minimal circulation of refrigerant through the evaporator, and reduces or eliminates the need to withdraw fluid. This active control also aims to minimize the energy losses found in the plant solutions used today.

The project is working on three system solutions – Controlled Circulation Rate (CCR), Dry Return (DR) and the use of microchannel evaporators. The expectation is to reach a specific weight of 1.4kg of ammonia/kW cooling capacity (11.1lbs/TR) for the CCR solution, 1.2 kg/kW for the DR solution, and to go even lower for the microchannel solution, according to Kristófersson.

The FARS project is supported by the Danish Energy Technology Development and Demonstration Program (EUDP). Partners in the project include Danfoss, Danish Technological University, Innoterm, Aluventa, Scanico and Claus Sørensen.

This solution is being developed for existing industrial refrigeration systems that have been employed for the past 15 years. These typically use manual control valves, which are set to a fixed opening degree during the start-up phase of the system. During the life of the plant, this degree of opening increases only if problems arise. This means that systems may run at a higher circulation rates than they were designed for. Circulation rate is the ratio between the mass flow rate needed to evaporate all of the refrigerant in the evaporator and the actual refrigerant flow through the evaporator.

The designed ammonia circulation rates for traditional systems are usually around 3 for cold storage facilities, and it is not uncommon to see new plants with a circulation rate of between 4 and 7 when they have been in operation for a while, Kristófersson said. “This results in increased operating costs and a significantly higher charge than necessary.”

The solution DTI is currently testing in the laboratory is to adjust the refrigerant circulation through the evaporator to the lowest possible level, and keep it there under different load variations. In this way energy can be saved due to a smaller pressure loss in the return pipes, and the charge can be lowered due to the lower circulation.

Test results have shown that with a state-of-the-art evaporator it is possible to reduce the circulation rate to 1.5, with a specifc charge in the evaporator of 0.17kg/kW (1.32lbs/TR), and a total system charge of 1.4kg/kW (11.1lbs/TR), without reducing the cooling capacity.

The DR solution works on equipment using liquid directly from the high-pressure side into the evaporator, and ensures that the gas coming out from the evaporator to the suction line is dry, but without overheating.

In this way, it is possible to make the systems significantly cheaper and simpler, and at the same time improve the efficiency of existing solutions, Kristófersson said.

By using the high-pressure liquid directly in to the evaporators, it is possible to avoid liquid containers and pumps. In addition, pipe sizes can be reduced.

DTI is currently testing a specially developed evaporator for DR together with a suction gas exchanger, which boils off the liquid leaving the evaporator before it is led to the suction pipe.

The amount of liquid for the evaporator is controlled with a newly developed sensor so the gas comes out slightly wet from the evaporator.

Another challenge is the expansion valve. Due to the high latent heat of ammonia, any small movements of valves can cause a large change in capacity. DTI has found that the currently available valves are not precise enough, and work is being done to solve this challenge.

To further increase efficiency of evaporators and reduce charge, the project is investigating the use of microchannel evaporators.

For example, a number of simulations have been made to find out the most appropriate design for drainage of water after defrosting, as well as efficiency. A prototype evaporator is currently being built by project partner Aluventa.

The size of the evaporator is chosen such that the performance must be the same as for the other evaporators tested, and that the pressure drop on the air side will not be greater than for other evaporators. This is done in order to compare the new micro-channel evaporator with a conventional state-of-the-art evaporator used in the industry. 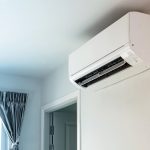 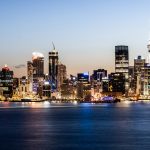