Dave Pearson, Director of Star Refrigeration, based in Glasgow, Scotland, has been awarded the J&E Hall Gold Medal, in recognition of his work to “promote heat pump technology at an industrial level,” according to a press release from J&E Hall.

Pearson received the medal at a ceremony on February 27, during the Institute of Refrigeration’s annual dinner.

“I was stunned to hear the news that I’d won the J & E Hall Gold Medal,” Pearson said. “My focus for the past 12 years has been the development of industrial-scale heat pumps and their place in the market. I’m not smart enough to be developing new refrigerants or the re-adoption of CO2 for example.”

“I’ve just been plugging away at raising awareness of how well heat pumps can support our sustainable heating goals,” Pearson added. “The award is most welcome.”

The J&E Hall Gold Medal aims to recognise the most outstanding practical contribution in the field of refrigeration, air conditioning and heat pumps. The award is open to individuals or teams who have made an original contribution in the following areas: practical applications of innovative designs, projects that have made an original contribution to the field, systems that demonstrate substantial potential and evidence that they will be completed successfully, and outstanding and significant work in a new or unusual area.

Dave is not the first Pearson to win the gold medal. His father, Forbes, won the award in 1991, and his brother, Andy, was honored in 2006.

During his career, Pearson has worked extensively on ammonia systems, and he has also spearheaded the deployment of water-based technology. He led the team responsible for the installation of the world’s largest water-sourced 90°C (194°F) heat pump system in Drammen, Norway.

“The key difference with large heat pumps is the temperature that they can get to which will make projects like this viable,” Pearson explained. “It’s only recently that we’ve been able to get efficiencies to a level that can make a difference on this scale.”

“We’ve adopted ammonia as a working fluid because of the high temperatures that can be reached and a saving of around 25% electrical demand compared to synthetic working fluids,” he added.

Apart from his work in developing heat pump technology, Pearson has spent significant amounts of time in the past decade lobbying at local, national and international government level for the inclusion of large heat-pump systems in low-carbon housing, social and commercial schemes.

Pearson also speaks at conferences and universities to help spread the knowledge of heat-pump technology, and help people see its value in harnessing renewable electricity.

It is far from the first time Pearson has been recognized for his work. In 2018, he received the Alan Moor Award, and in 2019 he was named Scottish Renewables Green Energy Awards – Champion of Renewables. 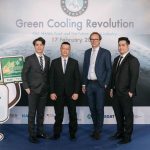 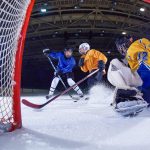