Of those, an estimated 200,000- 220,000 heat pumps – about 2% of the installed base – use propane (R290) as the refrigerant, mostly for domestic applications, according to shecco, publisher of Accelerate Magazine. Most of the rest use HFCs, with some employing ammonia or CO2.

But as HFCs continue to be regulated in Europe and around the globe, the market potential for heat pumps using propane to replace f-gases is huge.

Propane has a good coefficient of performance (COP) compared to other refrigerants commonly used in heat pumps, which helps keep propane charges 4 0%-60% l ower t han average. In Europe, the charge limit for R290 heat pumps are generally 1 kg in a direct indoor system (depending upon room size) and 5 kg outside or in a special enclosure. Small, self-contained heat pumps limit charge size to 0.3 kg. Capacities range from 4 kW (1.1 TR) for small, self-contained units to 50 kw (14.2 TR) for space/hot water domestic heat pumps.

Europe is a particularly promising market, because propane performs well in providing space heating for mild climates. In Japan, where residential heat pumps are well established, CO2 tends to be used, providing the high temperatures required for the hot baths favored in Japanese culture.

But R290 heat pumps face a number of challenges as well. First, manufacturers are turning to R32 – an HFC with a GWP of 675 – in a big way. Economies of scale are driving down the initial purchase price of R32 units, and most homeowners consider cost to be a decisive factor in purchasing the equipment.

Moreover, according to a report written for the EU-funded LIFE FRONT project, standards limiting refrigerant charge sizes and a lack of trained technicians are slowing down the uptake in Europe of hydrocarbon-based refrigeration, air conditioning and heat pumps.

Yet policy can also help facilitate the market. The latest EU F-Gas Regulation – in force since 2015 – aims to reduce the European Union’s HFC use by 79% by 2030. It is steadily banning the use of f-gases, with the scope and timing varying by sector. Under the regulation, HFC prices in Europe have been steadily increasing, according to data from Öko-Recherche, which does environmental research and monitoring. For example, average purchase prices of R134a, R410A and R404A were under €2 ($2.40)/tCO2e in 2014, but jumped to between €7 ($8.30)/t CO2e and €23 ($27.20)/tCO2e in the first quarter of 2018, the study said.

In the U.K., for example, the Renewable Heat Incentive (RHI) – launched in 2014 – provides financial support over seven years for owners of renewable heating systems such as heat pumps (which tap heat from the environment). And in France, heat pumps are often eligible for an Energy Saving Certificate (CEE) from the state thanks to the heat recovery offered by these technologies.

As the business and environmental case for propane-based heat pumps grows, so too is the number of companies offering them on the European market, which stood at around 25 in 2017. That was certainly evident at ISH.

For example, Wolf GmbH, a German manufacturer of heating and air-handling systems, launched its first R290-based heat pump at the German trade show. “First we’ll start selling it in Germany, then in other [European] markets,” said Simon Reddig, responsible for training at Wolf.

Vaillant, another German OEM, plans to use propane as the refrigerant across its heat pump range. “We don’t want to follow an intermediate solution,” said Elmar Zippel, Vaillant’s heat pump project manager. “Our aim is to step [by step] introduce R290 in all our products.”

Czech manufacturer Hotjet says using propane in its new monoblock heat pump allowed it to meet the EU’s most efficient energy label rating (A+++) under the Ecodesign Directive, which regulates product design. Energy labels help European consumers make informed choices based on the energy efficiency of a wide range of products, including air conditioners, fridges and heat pumps.

Hotjet displayed the new air-to water heat pump at ISH, having launched it in September 2018. “This will be the future – R290,” said Tarek Abdou, the firm’s export manager. “It looks like generally the heat pump market will turn to propane.”

Roth was pushing the ThermoAura F air-to -water R290-based heat pump, which uses an inverter. The unit heats and cools buildings using a water tank, and can be integrated with under-floor heating.

Heat pumps fitted with inverters give consumers the option of automatically shifting heating to when it is needed most, said Karl De Keyser, sales representative for Roth Belgium.

Alpha Innotec (part of the NIBE Group) has also invested in an inverter-driven R290 heat pump system. The alira LWDV has a small closed circuit, with less than 1.2 kg of charge, but it has to be installed outside. “It is more cost-efficient [but] more expensive than a regular R290 heat pump,” said Martin Lippold, who works in distribution at Alpha Innotec. 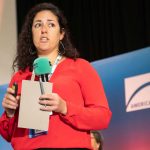