“A flooded ammonia system is the most efficient and environmentally friendly refrigeration solution at these working conditions,” explained Paul Arrowsmith, Refrigeration Engineering Manager at Sainsbury’s Supermarkets.

The baseload electrical power for the facility is provided by a natural gas-powered combined heat and power (CHP) engine. The waste heat from this power generation serves two functions: the lower grade heat is used to provide heating and hot water within the distribution center offices and amenities, while the high-grade exhaust waste heat is used to drive an ammonia-absorption refrigeration cycle. “The absorption plant has been uniquely integrated into the mechanical refrigeration system to maximize the overall cooling system efficiency,” said Arrowsmith.

Normally, ammonia compression systems reject significant quantities of heat into the environment, reducing efficiencies. However, in the Sainsbury’s system, the ammonia system rejects its heat into the common hybrid condensing system, which enables heat to be recovered for both underfloor heating and air cooler defrosting. “This also considerably reduces other associated waste streams, such as cooling tower water, chemicals, effluent, and fan and pump power,” said Arrowsmith.

Hybrid condensers operate wetted during the hotter and peak load times of the year and dry for the remaining. “The large surface area of this type of condenser enables a significant reduction in fan power and water consumption throughout the year,” explained Arrowsmith.

A combination of inverter-driven reciprocating and screw compressors in a two-stage compression system used in refrigeration to maximize of the part-load condition. The control strategy of the compressors further ensures that the compressors are operating at their optimum efficiency point.

“A flooded ammonia system is the most efficient and environmentally friendly refrigeration solution at these working conditions.”

Various other energy-saving, energy-optimizing steps were taken. The cold storage envelope has been constructed within a developer’s shell using industry-leading composite panel technology and the highest panel thicknesses available, including the underfloor insulation. Even the heat losses through the insulated cold store floor are recovered via an ammonia liquid subcooler after the condenser, further increasing the efficiency of the refrigeration system.

All electrical motors used on the project, no matter the load, are high efficiency and incorporate speed control for optimal regulation and energy efficiency. Variable-speed screw and reciprocating compressors are used to improve the overall efficiency together with absorption cooling and heat recovery via de-superheating and subcooling.

Even the docking facilities are state-of-the-art. The 66 dedicated controlled-atmosphere vehicle loading docks are designed to reduce the impact of moisture ingress and parasitic load within the chamber. Air-modelling was carried out on the dock air-flow arrangement to ensure minimal ingress and bespoke air blades were developed as a result. “The dock seals themselves were developed specifically for the distribution center to reduce air ingress and provide a fully pneumatic seal around the trailer, which is unique to the industry,” said Arrowsmith.

According to Arrowsmith, the Northampton distribution center’s electrical consumption as a whole has been benchmarked against the Improving Cold Storage Equipment in Europe (ICE) cold store energy report – a global survey to determine actual energy use from 659 refrigerated warehouses over 21 different countries. 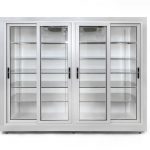 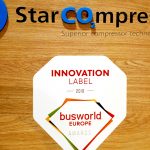