Humankind relies on the sun as a source of heat energy, but Aaswath Raman points out that there is another renewable resource above us: the sky, and beyond it, the cold of space.

Raman, an electrical engineer at the University of California, Los Angeles, is co-founder of SkyCool Systems, a Davis, California (U.S.).-based start-up. His work focuses on leveraging a natural phenomenon – radiative cooling – whereby materials exposed to the night sky emit more thermal (infrared) radiation than they take in, thereby becoming colder than the ambient air. The ancient Persians used this technique to create ice.

Funded by the U.S. Department of Energy, SkyCool has developed a prototype system whereby mirror-like reflective panels, made of special materials, leverage radiative cooling not only at night but also during the day to passively cool water.

During the day, these panels both reflect sunlight and radiate heat at particular wavelengths that break through the atmo- sphere and pass into space. The panels’ temperature can drop to up to 15°F (8.3°C) below ambient, according to Eli Goldstein, CEO of SkyCool and its other co-founder. (See, “New Kids on the Block,” Accelerate America, January 2018.)

As a passive cooling system, SkyCools’ technology can be employed as a condenser or subcooler in commercial refrigeration, providing a 10%-15% efficiency boost, said Goldstein. The system could be particularly useful as a gas cooler in a transcritical CO2 system, he noted.

SkyCool recently completed the instal- lation of its first supermarket pilot in Northern California (U.S.), using the panels as a subcooler, Goldstein said. “Happy to report that we are seeing a good amount of subcooling, and are hitting the 10% to 15% efficiency improvement target.” Subcooling can be as much as 20°F (11°C) below the outlet of the condenser, he added.

Raman recently co-authored an article in the November 20 issue of the journal Joule in which another application of the technology was described: using radiative cooling at night as a means to generate enough electricity to power a light bulb. This device creates a cooling effect on one side, while the opposite side remains warmer; the difference in heat is converted into electricity (25 mW/m2) via a thermoelectric generator.

The window to space

In explaining radiative cooling at a TED Talk presentation in 2018, Raman said that the greenhouse effect, in which the atmosphere absorbs and reflects thermal radiation back to earth, doesn’t capture all of the heat; some of it – at wavelengths between eight and 13 microns – trickles through into space. Radiative cooling, he noted, is negated during the day by the radiation from the sun.

To overcome that, Raman used insights from nanophotonics and meta-materials research to design a multi- layer optical material more than 40 times thinner than a typical human hair. This material releases its thermal radiation to “precisely where our atmosphere lets that heat out the best,” he said. “We targeted the window to space.” The material also reflects sunlight to avoid being heated up. 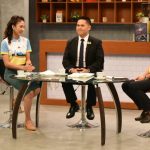 Thai Environment Minister to Speak at NatRef Event in Bangkok 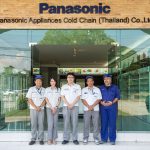