Japanese cold storage operator Hamamatsu Itaku Soko reduced energy use by up to 35% at one of its facilities after replacing an R22 system with a transcritical CO2 system, the company said at ATMOsphere Japan 2020, held in Tokyo, Japan, on February 10.

In 2018, Hamamatsu Itaku Soko replaced a 22-year-old R22 system at its Yonezu Cold Center facility with the transcritical system, supplied by Japanese OEM Nihon Netsugen Systems. The cost of the installation was supported by Japan’s government subsidies for natural refrigerant systems.

“Our old R22 unit was reaching its lifetime end after running for 22 years,” explained Kenichi Suzuki, President, Hamamatsu Itaku Soko. “Three or four years ago, we looked for freon-free alternative options for replacement of our freon equipment. And then we learned that the Japanese Ministry of Environment was offering natural refrigerant subsidies. And then we learned about CO2 refrigeration systems at that time.”

Japan’s industrial refrigeration sector is increasingly adopting natural refrigerant systems as it seeks to phase out the use of R22 over the next few years.

“Among our members who were surveyed, the use of R22 went from nearly 80% in 2012 to 58% in 2018,” said Shigekatsu Koganemaru, Board Member, Japan Association of Refrigerated Warehouses (JARW), who also presented during ATMOsphere Japan 2020. “In the same time, the use of natural refrigerants has gone from 17% to 31%.” 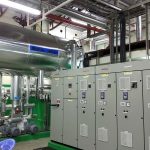 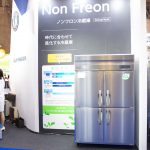