A propane (R290)-based remote system at a Supermercado Condor (Wenceslau Braz) supermarket in Curitiba, Brazil has produced energy savings of 30kWh/month (a drop of 3.5%), compared to an almost-identical supermarket in the same chain and city using R134a.

The system, installed in April 2019, consists of a propane (R290)/glycol chiller and R290/glycol/CO2 cascade system.The demo installation cost 10% more than one utilizing R134a.

This data was shared by Rogério Marson Rodrigues, Engineering Manager for Brazilian OEM Eletrofrio, provider of the refrigeration technology, during ATMOsphere America’s Latin America-focused program in Spanish on October 22. (The online conference was organized by shecco, publisher of this website.)

The project was a joint venture between Eletrofrio, UNIDO, and the Ministry of the Environment of Brazil, with the impetus coming from the Kigali Amendment of Montreal Protocol. (Brazil has not yet ratified the Amendment, which calls for a global phase down of HFCs.)

Eletrofrio now has four supermarkets in Brazil using this system, and the technology has been received well in the country, he said.

The Eletrofrio remote system differs from many other R290 supermarket systems around the world that use self-contained R290 condensing units inside of display cases. Another example of a remote R290 system is one used by Whole Foods Market at a store in Santa Clara, California (U.S.).

Rodrigues explained that in order to make the system as safe as possible, glycol was used for medium temperature cabinets and cold store rooms, while low temperature was handled using CO2 (cooled by glycol). This means R290 only circulates in the machine room, where it is condensed with water cooled by a dry cooler.

“R290 is a flammable fluid, but one shouldn’t be scared of it,” said Rodrigues “It just requires knowledge, knowing the processes, and respect.”

The cooling cycle takes place in a sealed box, Eletrofrio’s model EcoP B, in order to prevent leakage and reduce the amount of propane needed for cooling to the “lowest amount possible,” 1.90kg (4.19lbs) per box, or 11.4kg (25.14lbs) in total.

This installation has six EcoP B boxes, each with a cooling capacity of 23.2kW (6.6TR). Each box includes an R290 chiller that cools glycol to -3℃ (26.6℉) and six subcritical CO2 compressors for low temperature cases, with the CO2 having an evaporating temperature of -26℃ (-14.8℉) and the low temperature cabinets being cooled to -18℃ (-0.4℉).

As an added safety measure, each box includes an air extraction mechanism, controlled by a remote monitoring system, to maintain negative air pressure in the box in case of a leak. 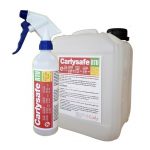 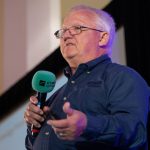 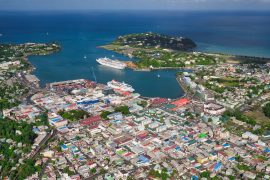