OTS presented a detailed paper on the software, “Development of a Tool for Estimating the Life Cycle Performance of MAC Systems,” at SAE’s WCX  (World Congress Experience) conference, held in Detroit last April. The paper looks at the GHG emissions of MAC systems, including refrigerants R134a, R152a, CO2 (R744) and R1234yf.

“The IMAC-GHG-LCCP tool is now available for license to the industry,” said Martin. “OTS will continue to further develop and support the tool’s use,” said Martin.

“With this information, automobile manufacturers are able to make evidence-based design modifications, meet applicable standards, and select the most appropriate refrigerants to reduce the emissions of greenhouse gasses,” said the OTS website.

According to the website, the IMAC-GHG-LCCP tool features several improvements over its predecessor, including a simplified user interface, decreased runtime  and expanded weather-data selection. User input options have been expanded to include the type of refrigerant, leakage rate, vehicle type, vehicle lifespan and climate conditions for more cities.

In addition, the new tool can address the use of electric compressors and water-based systems in MAC systems. “This gives auto manufactures a stronger start in the transition to electric cars on a mass scale,” said the OTS website. “With this new tool, capacity and power consumption inputs for a vehicle using an electric compressor can be entered for each combination of ambient temperature and vehicle speed, instead of ambient and compressor RPM as for a belt-driven compressor. This encourages the evolution of existing technologies and enables the testing of new MAC technologies.”

Also incorporated is support for systems with multiple evaporators, multiple chillers, and additional sources of power consumption beyond the compressor.

The paper suggests that future development of the software may include additional detail for electric cars, including heat pump systems.

The IMAC-GHG-LCCP tool is now available for license to the industry. OTS will continue to further develop and support the tool’s use. 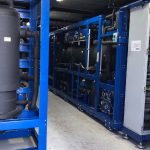