How to Save More Energy in a NatRef System

In the pursuit of future-proof and sustainable cooling and heating technologies, the refrigerant is often the center of attention – rightfully so, since synthetic refrigerants have been a bane of the environment for decades.

But in terms of greenhouse gas (GHG) emissions, refrigerants (a direct source) are only part of the issue. An even bigger (though indirect) contributor is energy consumption, if the energy is derived from a fossil fuel-based power plant.

According to the International Institute of Refrigeration (IIR), 37% of GHG emissions produced by refrigeration (including air conditioning, heat pumps and cryogenics) come from directly from CFCs, HCFCs and HFCs, while 63% comes from indirectly via energy consumption. (Refrigeration accounts for 7.8% of all GHG emissions.)

From an operating cost perspective, energy is also extremely significant, second only to labor. It therefore behooves end users of refrigeration to make the right choices with respect to managing their energy consumption. “Small changes to a system can produce substantial [energy] savings – or loss,” noted Eric Smith, vice president and technical director for IIAR.

While energy efficiency is always a major topic at industry conferences, it was particularly top-of-mind at the IIAR (International Institute of Ammonia Refrigeration) Natural Refrigeration Conference & Expo, held in Phoenix, Ariz., March 4-6.

The IIAR event for the first time devoted its four-hour pre-show Sunday afternoon program to “Energy Efficiency in Natural Refrigeration Systems.” And several other educational sessions and expo exhibits dealt squarely with how to cut energy usage in ammonia and carbon dioxide-based equipment.

Some opportunities to save energy require investments in equipment such as compressors with VFDs or better controls. But some improvements are cost-free. “The beauty of industrial refrigeration is there’s a lot you can do with what you have,” said Josh Bachman, director of customer engagement for Cascade Energy, an energy consultancy in Portland, Ore. who spoke at the IIAR energy efficiency educational program.  “There are a lot of low- or no-cost ways to save energy.”

Stefan Jensen, managing director for Australian OEM Scantec Refrigeration Technologies, who attended the IIAR Conference, noticed a “new wind blowing” at the conference in regard to interest in energy efficiency.

Energy efficiency is certainly a high priority for new IIAR chair Bruce Nelson, president of Colmac Coil Manufacturing, who would like IIAR to create an Energy and Sustainability Committee.

“If we want to apply good science and really recognize where our carbon footprint comes from, we need to think about the indirect emissions in our systems, not just the direct emissions related to refrigerants,” Nelson said in an interview at the IIAR conference.

Nelson plans to appoint a task force to identify the scope of activities and mission of his proposed Energy and Sustainability Committee, and present the results to the IIAR board. So far his idea has been “well received,” he said.

He envisions the committee would, among other things, “advocate on the part of the IIAR membership with regard to existing energy codes,” such as Title 24 in California, he said.

A program, not a project

However, there are a number of strategies that can be applied to any system, regardless of refrigerant, to improve efficiency. This article touches on some that pertain particularly to industrial refrigeration, but could apply in some cases to commercial refrigeration as well.

Bachman urges companies to adopt a “program” rather than a “project” approach to energy management. “You get your best reduction with a program approach – every week and day, like labor,” he said.

At the end of Sysco’s 2016 fiscal year, 108 facilities were included in the program and its energy management initiatives had generated cumulative energy savings of 42% since the baseline year of 2006, achieving more than $200 million in total avoided energy costs. “Over 10 years, there’s been a huge savings [at Sysco],” said Bachman.

Leadership support of the kind manifested at Sysco is the “No 1 metric” for a successful energy management program, said Bachman.

“[Leadership] needs to have clear goals, communicate a vision and create accountability,” he said. It may also be necessary to confront “tradition” in order to “make changes and save energy.” Technology is about 20% of what’s needed while “80% is about leadership and motivation.”

In terms of executing an energy management program, he stressed proper training of the “small number of people with their fingers on the switches,” Bachman said. Those technicians should know how to “tune” the system to maximize efficiency and track performance. “You can’t just rely on a utility bill; you need more data than that.” Finally, companies should look into capital projects.

Utilities can cover more than half the cost of efficiency upgrades, as well as pay for technical assistance, he said. “It’s your money, paid through your utility rates. “It’s up to you to get your money back – or someone else will!”

It helps to think of refrigeration systems as a “box of parts,” each of which can be adjusted for greater energy performance, said Doug Scott, president of VaCom Technologies, a La Verne, Calif.-based energy consulting company, who also spoke at the IIAR energy efficiency educational program. “The challenge of energy analysis is taking a box of parts and making it run like one system.”

Energy in a refrigeration system is roughly consumed in compressors (65%), condensers (15%), evaporators (15%) and refrigerant pumps (5%), according to Bachman.

Efficiency in refrigeration systems is highly sensitive to changes in temperature and pressure. For ammonia systems, an increase of 1°F in the temperature of the suction gas heading back to a compressor produces a compressor efficiency gain of 2%. “That is why we work so hard for a few degrees difference in application conditions,” said Scott.

“When you raise the suction pressure, the compressor grabs more [refrigerant] gas and you increase capacity,” Bachman said. “The power goes up as well, but the capacity goes up more than power.” This results in better efficiency.

Often resistance to change keeps the suction pressure where it is. “Nobody questions it,” said Bachman. “Does it need to run at three pounds? It’s worth investigating.” Raising the suction temperature may require nothing more than a “no-cost set-point change,” said Bachman.

At the other side of the system, lowering the condensing pressure/temperature reduces the power used by the compressor. In an ammonia system, every 1°F drop in condensing temperature improves compressor efficiency by 1.5%.

However, there are constraints when raising suction or lowering condensing pressures. On the suction side, the suction temperature has to remain lower than the load temperature. Also, when evaporators underperform – because of insufficient pump-out, poor defrost or dirty coils – they will lower the suction pressure.

The use of hot-gas defrost limits the ability to lower discharge pressure, he noted. As with evaporators, poor condenser performance is also a barrier to lowering discharge pressure. “Condensers usually look worse than evaporators because condensers are usually ‘out of sight, out of mind,’” Bachman said. He recommends going up on the roof and checking out the condenser. A thickness of 1/16thof an inch of scale on the coil will reduce a condenser’s capacity by 50%, he said.

Fan speed has an especially great impact on power usage because power varies not directly but with the cube of fan speed.  As a result, using variable speed on fans can save considerable energy.  “If you cut the fan speed in half, you use 1/8 the power,” noted Bachman.

Scott uses modeling to determine optimum efficiency conditions in refrigeration components like fans. In one example, a blast freezer used nine evaporator fans operating at 100% capacity along with two compressors, one at 100%, the other at rest.

After a retrofit, the fans were equipped with variable speed, and “we figured out what the fan speed would still do freezing for a typical load,” said Scott. He found the fans could operate at 70% of their speed – which brought down the compressor to 70% of its capacity – and still achieve the needed freezing. But that reduction in speed reduced fan power consumption by 62% and overall power use by 38%.

“A little reduction in fan speed can save a lot of power,” said Scott.

A produce plant found that – based on having light average loads and high fan power – that it could run its condenser fans at 45% to gain optimum power usage. “You wouldn’t think it could be that low but that’s the reason for modeling.” said Scott, who also cautioned that modeling should not be considered infallible. “You still have to understand refrigeration.”

Scott advised using energy modeling early in the equipment/project decision-making process “when it can optimize capital investment as well as operating cost.”

Compressors operate most efficiently at full load. However, full loads are designed for the hottest day of the year so more often compressors will work in part-load conditions.

For a screw compressor, VFD speed control is the most efficient way to operate at part load, said Bachman; slide valves, which are more common, are moderately inefficient. For reciprocating compressors, “cylinder unloading” – from 8 cylinders to 6 or 4 – “is not precise but very efficient,” he said. “It’s more efficient than screw compressor VFDs.”

Evaporative condensers work best perform best when their pumps and fans are run together, not separately. With multiple condensers, the “sweet spot” for fans with VFDs is running at 40%-70% speed. “And you want all of the condenser fans to run at the same speed.”

For example, eliminating contaminants will improve efficiency, said Pillis. This starts with the use of ammonia that meets refrigerant-grade purity. In addition, the infiltration of air during servicing can cause higher condensing pressures, with each psi elevation increasing power by about 0.4%. “Purging of non-condensable gases is necessary,” he said.

Meanwhile, the ingress of water into the system into low-side vessels may depress suction pressure, Pillis added. “An ammonia regenerator is needed to remove water.” The impact of water is greater in DX systems, which are being used more in low-charge ammonia systems, he noted.

Another efficiency factor is superheat’s impact on the suction line, Pillis noted. Every 10°F of superheat causes a 2.5% drop in efficiency. Conversely, on the liquid side, every 10F of liquid subcooling improves efficiency by 2.5%. “There’s energy saving there if you reject more heat from condensed liquid,” he said.

Pillis recommended avoiding oil pumps when possible, observing that a 5-HP pump running for a year at 10 cents/kWh would cost $3,300. “The most efficient oil pump is the one not running,” he said.

A significant amount of energy can be saved via heat reclaim in industrial systems. Pillis suggested using a glycol oil cooler for heat reclaim and a thermosyphon oil cooler when not reclaiming heat. The latter, however, adds ammonia charge, and is therefore not being employed in low-charge systems.

One of the advantages of a screw compressor over a reciprocating compressor is that the former is equipped with a secondary suction port for economizing and sideloads.

In economizing, additional gas resulting from subcooling of the condenser liquid flows into the secondary suction port. A sideload is a gas coming from a secondary evaporator at a temperature higher than that of the primary evaporator.

The compression efficiency for the gas coming through the secondary suction port is high “as additional frictional power is small,” Pillis said. “It’s like a ‘frictionless’ compressor.”

In general, economizing “is a very good way to save energy,” said Pillis. 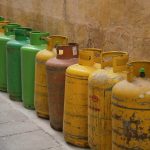 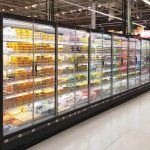