This is Part 3 of a six-part series detailing how the use of natural refrigerants has grown around the world, taken from the cover story of the June 2019 edition of Accelerate Magazine.

Given Europe’s pre-eminence in the field of natural refrigerant systems, it’s no surprise that a transplanted European, – Predrag (Pega) Hrnjak, research professor at the University of Illinois at Urbana-Champaign – laid the foundation for the technology in North America.

Inspired by CO2 visionary Gustav Lorentzen (see page 92), whom he met in the early 1980s, Hrnjak and his team have written papers on virtually every technical aspect of CO2 technology.

But transccritical CO2 refrigeration did not become a commercial entity in North America until 2008, when a French Canadian, Marc -André Lesmerises, launched Carnot Refrigeration in Trois- Rivières, Quebec with two partners in order to supply the Sobeys supermarket chain with its first transcritical CO2 system.

Sobeys went on to become one of the leading users of transcritical CO2 refrigeration in North America, with an estimated 140 stores now equipped with the technology, many supplied by Carnot. Other Canadian chains, like Loblaw and Longo’s, have followed suit, adopting transcritical in numerous stores.

It took a while for transcritical CO2 refrigeration to reach the U.S. Finally, in July 2013, Hannaford, a Scarborough, Maine-based chain (now owned by Ahold- Delhaize), opened a store in Turner, Maine, that was the first U.S. supermarket to use the technology. Its supplier: Carnot, whose factory is 240 miles away.

In December 2013, Whole Foods Market opened the second U.S. store to use a transcritical CO2 system (from Hillphoenix) in Brooklyn, N.Y. This store had the additional distinction of being the first in the nation to be completely HFC-free, from HVAC systems to break-room refrigerators to juice and beer dispensers.

The U.S. grocery chain that has become by far the leading user of transcritical CO2 systems is ALDI U.S. The chain, an independently operated member of the German retailer ALDI South (Süd), expects to have more than 320 stores using transcritical CO2 refrigeration by the end of the year, according to data published online in April by the Environmental Investigation Agency (see https://www.climatefriendlysupermarkets.org).

ALDI’s main transcritical system supplier has been Conyers, Ga.-based Hillphoenix, which has been a leading provider of CO2 technology to U.S. food retailers.

In addition to transcritical and cascade/ secondary CO2 systems, the other natural refrigerant used by North American grocers in significant numbers is propane (R290), largely in self-contained display cases at the checkout or in spot merchandising locations (with a maximum charge of 150 g). Target has deployed such cases in more than 1,000 of its 1,800 U.S. stores, while Whole Foods has them in 500 stores, according to EIA.

More recently, some U.S. supermarkets have begun installing R290 cases in partial or whole-store configurations, creating an alternative to centralized rack systems. One example is Hannaford, which is testing R290 in complete frozen-food lineups in some new stores, with heat removed by a glycol loop. Hannaford took its inspiration from H.E. Butt Grocery, a Texas chain that in 2013 became the first U.S. grocer to install R290-based self-contained cases throughout a store. (See “R290: The Future of Retail Refrigeration?” Accelerate America, January 2018.)

Hydrocarbons, notably R290, have also become prevalent in the foodservice sector, adopted by chains like McDonald’s and Starbucks, as well as brands like PepsiCo, Red Bull (using isobutane) and Coca-Cola (which switched gears from CO2). OEMs like True Manufacturing, Welbilt and Beverage-Air converted to R290 systems, which helped them meet the Department of Energy’s 2017 efficiency standards.

On the industrial side, low-charge ammonia packaged systems have become a marked trend in the U.S. since 2015. OEMs like Evapco, Azane and NXTCOLD (marketed by Hillphoenix), among others, have unveiled low-charge packaged systems and contractor/designers like CIMCO and Stellar have begun installing them.

Switch at the EPA

For many years, the Environmental Protection Agency in the U.S. had the authority to phase out high-GWP HFCs, while at the same time a voluntary EPA program, the GreenChill Partnership, worked with supermarkets to reduce HFC leaks and find natural refrigerant alternatives.

But in August of 2017 a U.S. District Court ruled that the EPA could not compel companies that had used HFCs as a replacement for ozonedepleting gases to replace the HFCs with lower-GWP substances like natural refrigerants. The EPA took the ruling a step further, deciding to abandon HFC regulations in all circumstances while it undertook new rulemaking. (See “The Policy Quagmire,” Accelerate America, June-July 2018.)

California reacted to federal backtracking by passing the California Cooling Act last year, which adopts most of the EPA’s HFC regulations and establishing an incentive plan for natural refrigerant alternatives. Other states, including Washington, Connecticut, New York, Maryland and Vermont, are now following suit, as part of the U.S. Climate Alliance.

ALDI US expects to have 320+ stores with transcritical CO2 refrigeration, many provided by Hillphoenix.

Meanwhile action on the federal level has continued to stagnate, as the Trump administration has so far declined to send the Kigali Amendment to the Montreal Protocol to the Senate for ratification, despite industry support for the amendment. By contrast, Canada and Mexico have both ratified Kigali, and Canada has launched an HFC-reduction plan.

Still, many U.S. end users see the wisdom of opting for future-proof natural refrigerant solutions that are immune to the vagaries of politics.

This is Part 3 of a six-part series detailing how the use of natural refrigerants has grown around the world, taken from the cover story of the June 2019 edition of Accelerate Magazine. 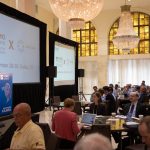