Turbo Air: Service No Longer an Issue for R290

Turbo Air, a Long Beach, Calif.-based manufacturer, says foodservice and food retail end users using its hydrocarbon-based fridges are no longer worried about the availability of technicians to service the units.

“The technicians are trained,” said Dan Cho, COO of Turbo Air, at the NAFEM Show in Orlando, Fla., in February. “It’s not a big deal.”

Turbo Air completely transitioned its product line in 2018 to hydrocarbons, including R290 and R600a, the latest in a series of U.S. OEMs that have converted to hydrocarbon refrigerants.

The company runs its own service network, across 13 U.S. branches, which covers 65%-70% of its warranty work, with the rest coming from third-party technicians, Cho said.

Turbo Air sells hydrocarbon units to such outlets as 7-Eleven, CVS, Burger King, Wendy’s and Dunkin’ Donuts, through dealers or directly to franchisees and corporate offices, he said.

Cho noted that many OEMs opt for a smaller compressor to meet ENERGY STAR 4.0, but this can result in a breakdown of the cooling equipment. “We use [newer] technology and better insulation” to meet energy standards.

A key foundation of its innovative technology is a self-cleaning condenser, which includes a fine mesh filter at the front to catch dust, and a rotating brush that moves up and down once a day to push excess build-up out of the unit.

The company plans to transition away from HFCs in its blowing foams, according to Daniel Kwon, supermarket equipment sales manager for Texaking, Grand Prairie, Tex, part of the Turbo Air group. “We will be changing to cyclopentane,” Kwon said. 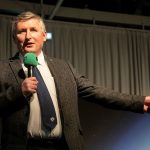 Ammonia Use to Grow ‘Significantly’ in Developing Economies, Thanks to Low-Charge Trend 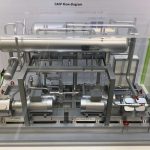