New Zealand’s largest hydrocarbon-based refrigeration system is scheduled to be up and running at Eastland Port — a commercial shipping port located in Gisborne  — by early 2020.

The system will deliver over 1 MW (284.3 TR) of cooling for two cold-storage areas that will handle nearly 3.5 million kg (7.7 million lbs) of kiwifruit per year, according to a statement released today by New Zealand-based system supplier EcoChill.

EcoChill specializes in installing natural-refrigerant based cooling systems in New Zealand and is responsible for the design, building, and installation of the Eastland Port system.

Site preparation is currently underway and handover is planned for the end of February 2020.

“Part of the challenge is the lack of knowledge within the heating and cooling industry itself in using natural refrigerants, particularly carbon dioxide and hydrocarbons.”

Eastland Ports’ decision to use the hydrocarbon-based system, according to EcoChill, was driven by its desire to reduce the environmental impact of its operations and to have a future-proof system.

Eastland Port is more the exception in the New Zealand market. “It is a concern that many New Zealand businesses, particularly those that rely on refrigeration, are not aware of the cost and supply risks that exist with the changes occurring in the refrigeration industry” said Matthew Darby, founder and managing director of EcoChill. “Part of the challenge is the lack of knowledge within the heating and cooling industry itself in using natural refrigerants, particularly carbon dioxide and hydrocarbons.”

With New Zealand beginning implementation of its HFC phase-down plans on January 1, 2020, alongside increases in the price of the New Zealand Carbon Unit, operational costs are expected to continue to increase for these businesses in the near future.

“What many companies are surprised to learn is that the future for new refrigerants in New Zealand is flammable,” with specific design and management, including health and safety, said Darby.

The cold storage areas will be leased by local fruit packer NZ Fruits, which packs kiwifruit, citrus, mandarins and persimmons for export and domestic markets, according to an article on New Zealand’s Newshub.

With the new cold storage facility at Eastland Port, NZ Fruits is expected to significantly increase its kiwifruit export capacity as well as reduce the environmental impact of its operations. 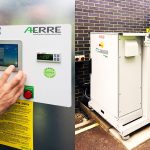