Transcritical CO2 refrigeration systems have traditionally not been considered a good choice for a desert country like the United Arab Emirates (U.A.E), where ambient temperatures can reach up to 51°C (123.8°F).

This is considered the first installation of transcritical CO2 in an Arabian Gulf (Persian Gulf) country, according to EPTA.

The reason for this is the FTE system. Launched at the EuroShop trade show in Dusseldorf, Germany, in March 2017, the system helps to improve the efficiency of CO2 refrigeration systems and overcome the challenge of an installation in a desert climate.

Based on simulations, Epta expected the FTE technology to enable energy savings of up to 25% in the transcritical system compared to a standard R404A system in the Abu Dhabi area.  But the energy savings turned out to be 40%-50% better in an analysis of electrical consumption data conducted from May to September in 2019, said Cavalet.

Despite operating at  “extreme temperatures,” the store “has performed exceptionally well, in line with the reliability of the FTE system installed worldwide,” Cavalet noted. The system has been supported by preventive maintenance performed on site by “trained Epta engineers,” he added.

The customer, My City Centre Masdar, “is totally satisfied [with] the reliability of the system and the energy efficiency showed,” said Cavalet.

The FTE technology, according to Epta, is based on a very simple design, whereby a low-pressure liquid receiver is used to flood medium-temperature cabinets with liquid CO2, eliminating superheat and allowing the evaporation temperature of the cabinets – and, ultimately, the efficiency of the system – to increase.

Over the past three years, the FTE systems have been widely installed in Europe and the rest of the world, and brought to North America following Epta’s acquisition of Kysor Warren last year.

Epta has not installed other transcritical CO2 systems yet in the Arabian Gulf, though “different customers showed interest and studies are ongoing,” said Cavalet. 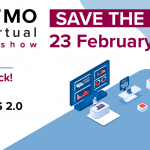